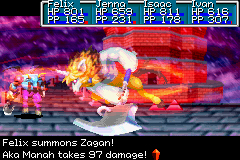 Zagan is a Summon of the Venus element found in Golden Sun: The Lost Age and Golden Sun: Dark Dawn. It is one of fourteen summons that are not automatically available once the required Djinn are obtained, but instead must be specifically acquired from a stone tablet that contains the summon. In its appearances, Zagan is the first such summon available to the player.

Before Zagan can be summoned, the player must first acquire the summon from a Summon Tablet. In The Lost Age, Zagan Tablet is found in Indra Cavern in the southeastern area of Indra, west of the beach where Piers’ Lemurian Ship is initially docked. The player must have already acquired the Lash Psynergy from the Kandorean Temple. In Dark Dawn, Zagan's tablet is found in a section of Carver's Lumberyard, and must be acquired before completing the Konpa Ruins, or the summon is permanently lost.

For a successful summoning of Zagan, the player must have one Venus Djinn and one Mars Djinn on standby. Zagan has a base Venus power of 50 and also does additional damage equivalent to 6% of the enemy’s maximum HP. In addition, all enemies have their defense cut by 25%, and therefore their defenses can be cut down to a maximum of 50% with a second summoning of Zagan. Afterwards, the summoner's Venus Power and Mars Power will be increased by 10 points each.

In The Lost Age, Zagan's summon sequence features a large minotaur with a single horn, lion's mane, and horse's tail leaping into the battlefield and attacking the enemy party with its axe in a fiery explosion. In Dark Dawn, Zagan's sequence is more detailed, with Zagan himself being more obviously demonic; the lion's mane is mostly gone, he is colored in primarily black and deep red, and his teeth are exceptionally sharp. The summon sequence involves the camera rapidly moving down a darkened arcade of carved black pillars, reaching a stone throne on which a somewhat bored-looking Zagan is resting. He quickly gets up, and lets loose a skyward bellow as his entire body briefly turns to utter darkness, save for his shining white eyes. He quickly conjures forth first his white eagle's wings, then his poleaxe, and finally a mystic portal at the other end of the arcade. He then rapidly flies towards the portal. When he goes through the portal, he emerges on the battlefield. With another mighty bellow, he slams the poleaxe down on the enemies, creating a massive explosion as he quickly flies away.

Zagan is the first Summon players can find that requires Djinn of multiple elements. Zagan is among Megaera (Mars), Flora (Jupiter), and Moloch (Mercury) as a Summon that can be used as a “placeholder” summon for more powerful “traditional” summons, in this case for Ramses. Since most players have one Venus Djinni and one Mars Djinni and do not have more than one Djinni of any element at the point they find Zagan, this summon is useful as the first relatively high-end attack that can be used by the party. It has 5/6 the power of Ramses but also can lower the defense of enemies. It can therefore prove useful in boss fights such as the one against Briggs in Alhafra. As more Djinn and Summon Tablets are collected, however, Zagan quickly becomes underpowered. However, it has one last chance to shine in The Lost Age, namely during the boss battle with Valukar. Here, Zagan becomes an extremely efficient and costless way, in terms of Djinn needed, to cut out about 800+ HP per summon because of the damage-in-proportion-to-max-health property of Summon sequences. Zagan also works well because it will not do nearly as much damage to you when the boss uses the monster skill Crucible, as higher level summon would.

Zagan in demonology is a Great King and President of Hell, commanding over thirty-three legions of demons. He is often depicted as a griffin-winged bull, although the body may sometimes be that of a man. His main power is transmutation — he can turn water into wine and vice versa, produce precious metals from base metals, and even instantly reshape any metal into coins of that type.

Zagan full sequence
Add a photo to this gallery
Retrieved from "https://goldensun.fandom.com/wiki/Zagan?oldid=42604"
Community content is available under CC-BY-SA unless otherwise noted.